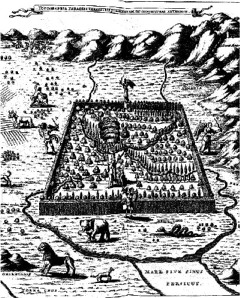 ‘In 2003 Sarmast compiled a list of similarities between Plato’s description of Atlantis and the Urantia Book’s ‘Garden of Eden.’

‘Sarmast organised an expedition in late 2004 that produced ‘evidence’ of manmade structures, including two ‘walls’ over 3 km long. The site is about seventy miles east of Cyprus towards Syria. At a press conference to announce his discoveries Sarmast was challenged by, Michel Morrisseau, a French geologist who lives on Cyprus, to prove that the Mediterranean had been inundated more recently than the conventionally accepted five million years.  Sarmast had no convincing response. However, subsequent to that he attempted to support his views with the unsupported assertion that earliest geographers knew of the breaching of the Gibraltar Dam and that ancient traditions had it that Hercules used his giant mace to smash open the Dam and allow the Atlantic to flood the Mediterranean and so led to the association of Hercules with Gibraltar. ‘  http://atlantipedia.ie/samples/sarmast-robert-behzad/

However, always Beware of False Prophets.