Avalon
1 July 2017
A consideration of some of the technical, chronological, iconographic, etymological and occult features of the disaster.
https://veaterecosan.blogspot.co.uk/2017/07/grenfell-by-accident-or-design.html
17 June 2017
London is Burning: Grenfell Tower & London Bridge – How many lies
https://freemanjack.net/london-burning-grenfell-tower-london-bridge-many-lies/

John says:
June 22, 2017
Thank you for the show and the article. Only just recently discovered Autonomous Media, Mark Windows and the Raconteurs team along with your own work, and am going back through the archives catching up – good to have a UK based ‘Truth’ network as opposed to the many US based ones.

I was intrigued by the alternative scenarios that you put forward concerning the City of London stabbings, some of which, such as the gang war theory, hadn’t crossed my mind. Interesting to consider your point that some incidents may be of a ‘private’ nature but are being used by the media and government to prop up a ‘terror’ narrative.

Regarding the attention now being given to councils and their finances, have you heard of the idea that councils, through their accounting/budget methods may have much more money available to them than they admit to in public, and are in fact hiding a large part of their assets by calling them ‘future liabilities’ in their annual accounts instead? I’m not great with understanding figures myself or getting my head round much of this apparent fraud, so haven’t done much research beyond reading what other pioneers have published so far; but one of the best researchers into many different areas connected with the law and government I’ve ever come across is US-based Clint Richardson who has pursued this matter and has written about it on his blog, and even published an article on how to research the UK CAFR equivalent –
https://realitybloger.wordpress.com/2013/03/04/cafr-investment-scheme-in-the-united-kingdom/

I think it would be a worthy avenue of research for the Autonomous crew to have a look at. I believe Clint himself is well up for doing interviews at the moment, having just made available a free book at http://www.strawmanstory.info/
I recommend issuing him with an invite to come on one of the radio shows for a chat.
(I’m not connected with him in any way, I just admire his work).
Cheers, J

Windows on the World
Published on Jul 2, 2017
THE SECRET RECORDING THEY TRIED TO BLOCK ABOUT GRENFELL TOWER

JohnnySupertramp3
He says his father is a leaseholder there.  That’s the interesting bit.
Published on Jun 29, 2017


GRENFELL EVIDENCE OF SATANIC TERRORIST MASS MURDER
Proof and evidence that residents chose fire proof cladding and they were lied to and they switched it.

The Satanic Terrorists changed their Insurance provider ‘3 months before’ the fire to one that ‘SPECIALIZES IN CASUALTY INSURANCE’
Set to gain the biggest payout of £1 Billionhttp://www.insurancebusinessmag.com/u…

Here are links to reports about the Key Satanic Terrorist Ringleaders
http://www.soulutionariestvnetwork.com/downloads/ 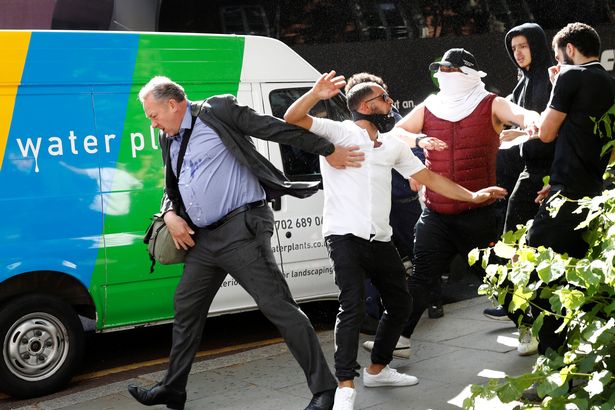 Demonstrators confront a man they believe to be Robert Black, the Chief Executive of KCTMO, outside Kensington Town Hall -http://www.mirror.co.uk/news/uk-news/furious-protesters-chant-murderers-outside-10635665

Here’s why the Grenfell Tower fire has INSIDE JOB written all over it.

StillSpeakingOut
Published on Jun 15, 2017
Obvious inside jobs are obvious.

ghost ghost3 hours ago
THEY NEED TO DISTRACT US FROM THE FUNERALS OF THE ALLEGED VICTIMS OF THE MANCHESTER ATTACK, WHICH IS GOING TO BE VERY DIFFICULT TO PULL OFF. OTHER EVENTS LIKE THIS ARE PLANNED. WATCH!

hassan erhan
how are u going to throw a baby 10floors high to save he or she and catch the baby impossible man open your eyes Repeat script as in melbourne’s flying baby?

IRISH TRUTHER101 (edited)
i agree too cheeres for the vid dont mind the hate the news is faking everything! next they probably say it was a muslim that done arson on it.. nothing but hoaxes and much hatred growing upon muslims who did not perpetrate these hoaxes. london manchester and paris are 2 centres of attention for the jews right now. the ariana grande thing was another hoax as they all are but most dont see it at all

hometown stan
Yes, I agree, something very major in the pipe line , its totally out of control now . There is no going back. We will never know normal life again? Hope we are wrong though but I doubt that?

Starsky Hutch
dont forget that the Sears Tower was also rigged with thermite on nine one one, SIlverstein who then owned the Sears tower had also insured the building just like the towers with a “double indemnity policy protection for terror attack” Something happened and they changed their plans at the last moment.
So there will be something the jews have planned, and prob a mini nuke for Manhattan, Trump will be the insurance beneficiary there.

An Dramatic5
I like the content “ODD Reality” is putting out, too…
We don´t know who we could/should trust.
Everyone of them could be an agent or whatever…
The most important thing to me is the truth they are spreading…
We start to think, I mean to really think for ourselves…
Get de-programmed…
Before I actually came to the flat earth stuff last year, I was researching chemtrails, weather-manipulation, staged events, PsyOps, 9/11, politics, freemasons, world wars (not the school stuff;-), etc… basically the whole system we live in, I came to a 5min video, that was called like “There are no real footages of earth from space” & I watched it.
After the experience in research I´ve already had at this moment, everything was possible to me…
And so I went to the google picture search & typed in “REAL FOOTAGES OF THE GLOBE FROM SPACE” & what I saw, was … well… indescribable…
And they linked me directly to the homepages of all these space-agencies like NASA, ROSCOSMOS, ESA, DLR, JAXA, etc….
(If you read this & you are someone who has never heared about the flat earth, then PLEASE, really google what I googled & then see for yourself…or look for “REAL FOOTAGES OF SATELLITES IN SPACE” these ones are even more unreal & clearly animated…)
It is just so UNBELIEVE A BALL!
(I gave one of my selfmade music songs the title “Unbelieve a ball”…check it out if you like to… I also edited a video to it…)
And to that video about no real footages of earth from space, I got suggestions by youtube about similar related topics & flat earth…
I needed actually only 30 minutes to realize the biggest lie ever…
But it took me maybe 2 weeks to REALLY be convinced, that the spinning ball is a total 100% lie!

Emi Poo
MR SELF IMPROVEMENT Hello there, I have to disagree when you say this was a hoax and no-one lived there… I know for a fact they did as I live around the corner from there and believe me that real people died in that building! It was a set-up for sure and they want the area for rich people so this was a great way to clear out the council tenants and make way for the filthy rich!! So props for being brave enough to get the truth out but often time real people die in these things and basically sacrificed.

MR SELF IMPROVEMENT
Hey. Yes you make a good point about them wanting to clear out the council tenants. That is true. But I don’t believe anybody died. It’s too messy for them to have dead people and their families demanding answers. It’s much easier to just clear the apartment blocks. A lot of people lie and say things like I know somebody who died in the hoax terror attacks. So unless you actually know someone who definitely died in this, then I’m not not changing my opinion. Any news story that gets 24 hour coverage is a 100% hoax. If this really happened as an accident then they would cover it for 5 minutes and you would never hear about it again. But they love to keep ramming their fabricated news stories down people’s throats.

G-man
7’s & 66’s everywhere. They know Jesus is coming & need everyone in a panic