pov603 » March 24th, 2017, 9:25 am wrote:
‘Interesting’ picture above which, in the background, seems to show the couple on the floor in the exact same ‘pose’ (left foot off the ground) as the earlier photo above. Hmmm…

Also, I ‘love’ the name:
Aysha Frade, a teacher in her 40s, and US tourist Kurt Cochran, 54, were killed on Wednesday, while a 75-year-old man died on Thursday evening after his life support machine was turned off.

Leslie Rhodes? Christ on a bike!! How did I miss that? Organs. Although strictly speaking Leslie’s are rotating speakers. Was there a Mr Hammond there too? http://www.ebay.com/bhp/leslie-speaker.

Huge Dickinson indeed! What a load of COCK.

GW: Beverly Rhodes was involved in 7/7 as well.  All Rhodes lead to? 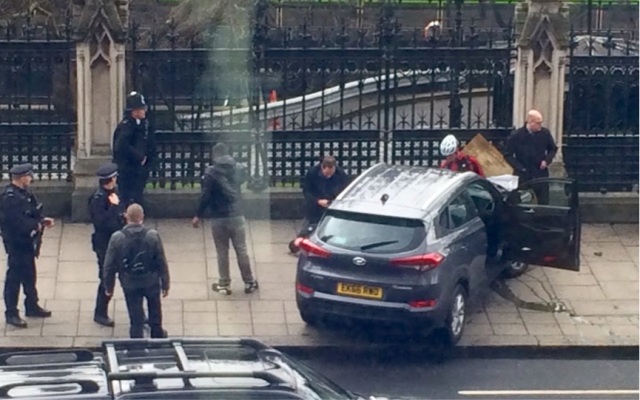 DRY: Piece of random 3 Ply in front of car hiding the fence – as there is no damage to it. WET: Latex body was under the Red Bus 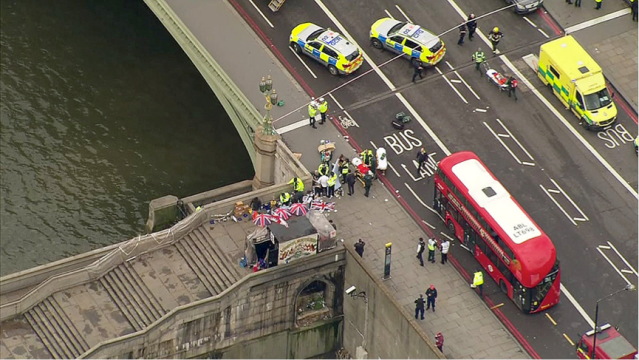 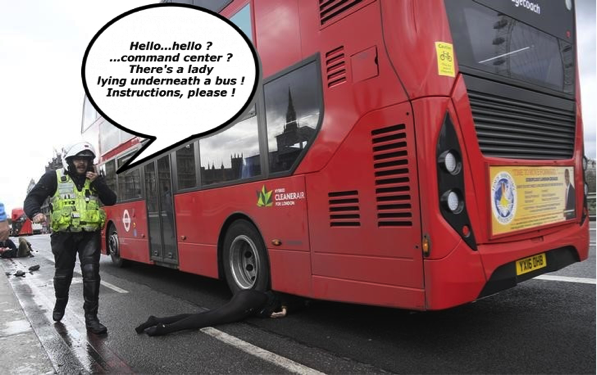 22 March 2017
Attack on Parliament March 22: The Westminster rampage at the heart of Britain’s democracy

Andrew Tyrie has written to chancellor Philip Hammond, warning the current lines of accountability for cyber security for the sector are too “opaque”.

“A woman jumps into the Thames”

or should that be:

“…after the car had passed her a woman bungee jumped her way into the Thames thus allowing her to enter the river safely?”

That’s how the footage looks to me:

Tom74 says:
If it wasn’t staged then it doesn’t say much for the security forces if they can’t even guard the Houses of Parliament. But don’t hold your breath for any resignations.
Old Hatchet Face is already making the most of it for her CIA bosses, of course. 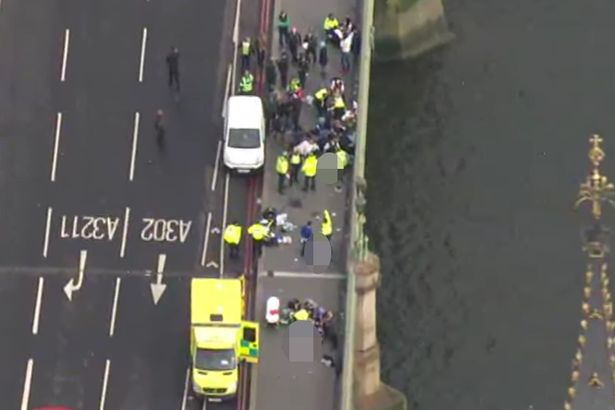 Resembles Car Attack Melbourne in that he drove on pavement and ”hit” pedestrians.  Crashed into barrier at Westminster to hide no blood on bumper????  Knife incident also involved.  So he got out of crashed car and wielded knife????

Truthgains81 (edited)
There doesn’t appear to be much blood on the scene, considering a policeman was stabbed to death and the terrorist was apparently shot, also the knife appears to have no blood on it whatsoever. No water bottles or prams just yet, they must be reading our comments.

Anti Troll
yes however they did place some shoes in various locations, also identity tags

angela tate
Lol, no fake event would be complete without the shoes. It’s probably a specialist job by now, professional shoe placer or something of the like.

Affected Area
I just saw a video on Dahboo’s channel – commenters pointed out that the crowd seemed to be standing still then all started running at once as if under command.
UK Parliament Attack: Man Shot After Cop Stabbed at UK House of Commons

starlightlake
Still don’t know, but I noticed that from photos some ‘casualties’ are in road not on the WB pavement where alleged perpetrator is meant to have mounted in his 4/4. Also twitter people complaining about people taking pictures of casualties at the scene.

Affected Area
Maybe they got tired of us pointing out that the ‘terrorists’ never attack Israel or western politicians, so they came up with this nearly but still not ‘Westminster attack’. Cue more protections and security for ‘our’ traitor criminal MPs.

A
Antitroll, like you probably have, I’ve walked over that bridge hundreds of times. It’s fucking empty! Looks like the scene from 28 days later. Only hit, what, 10? Over that distance? If that was a normal day he would have hit at least 50 at a minimum. The hundreds and hundreds of people usually therw couldn’t have all jumped in the frigging thames. It makes me so furious

A
I’ve actually just checked and they filmed the 28 days later scene in exactly the same spot on the same bridge. Both empty, both with debris strewn on the pavement, both staring actors.

Eman Puedama
Definite hoax.
Radek Sikorski is a member of a geopolitical think-tank headed by Zbigniew Brzeziński, whose brainchild was Operation Cyclone- encouraging the Afghans to fight the Soviets in the name of God. Sikorski was working as a foreign correspondent in Afghanistan at the time- and intelligence asset too, no doubt. He was reporting from ‘deep in the ranks of the Mujaheddin’ according to The Spectator’s then editor.
He was also a member of Oxford’s Bullingdon club when Boris Johnson was there, and according to The Evening Standard, they still greet each other with shouts of ‘Bullers!’ – seems appropriate somehow.

Eman Puedama
Just been reminded that it’s also the 22nd of March- The occultic date when, 3 days after the vernal equinox, the sun starts to ‘rise again’. Also, in the American way of writing dates, it’s 322- the number of Skull and Bones.

tom ripley
And the coppers have asked for ALL recordings of the cameos taken by the Joes, just in case they “do a Melbourne” and expose the fraud.

david mcculloch
No blood anywhere from what I have seen. Body seen in water why would they be floating

Truthgains81 (edited)
Hero Tory MP tried to save Police Officer. Give me a break!!! http://news.sky.com/story/westminster-terror-attack-minister-tobias-ellwood-battled-to-save-life-of-police-officer-10810914 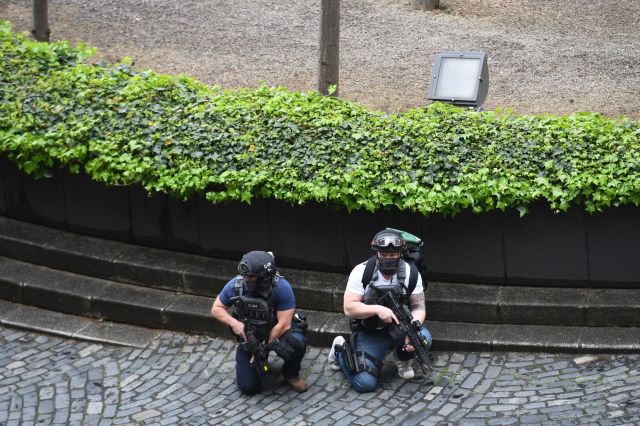 No Blood On Knife – Daily Mail 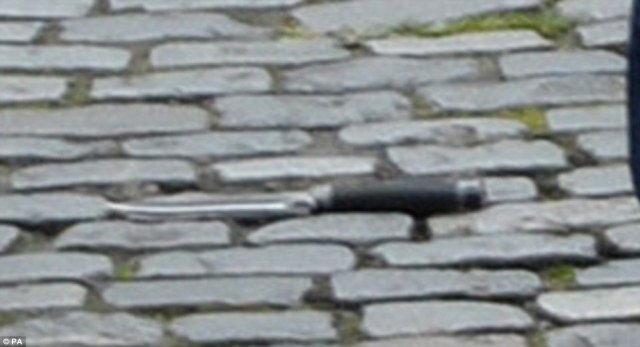 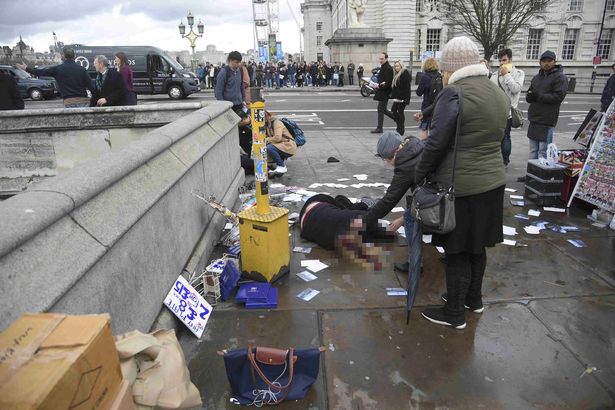 The card seller was hit on the pavement of the bridge? Why is she and the cards so far back then? 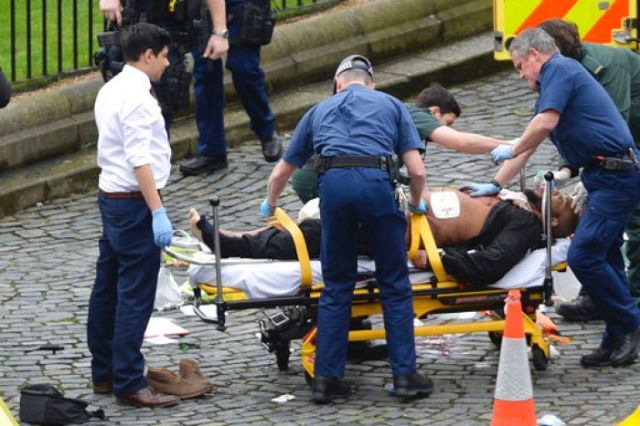 How did the perp get INSIDE the Westminster enclave? 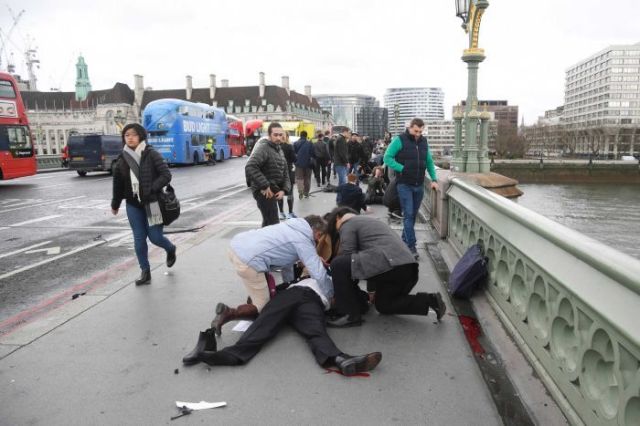 Manlegs Photo. One shoe off one shoe on????? Blood from leg but perfect trousers????