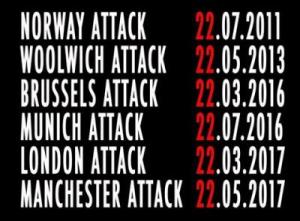 ”Many researchers have put a lot of work into exposing the way that many if not most of the ‘terror’ events the world has been forced to endure are, in fact, organised by factions within the very governments who are tasked with protecting the victims. This type of ‘false flag’ attack is generally used to drum up support for policy changes that generally generate profits for arms corporations, extend the limits of state/government control and reduce the liberty of the populations involved.

Unsurprisingly, here’s evidence of a move to do exactly that from Theresa May in Britain as a result of the recent Manchester event and also to extend the ‘state of emergency’ in France that give the government extended powers. Further evidence for this pattern is already well documented and can be found in ureka and elsewhere. I will embed some videos that cover this in more detail further down this page – for now though i want to focus on a specific topic… numbers.

As you can see from the image on this page, 6 of the more recent alleged terrorist attacks fell on the 22nd of the month and they shared the same 3 months. If we examine the full list of terrorist events globally during the last few years we see that there are so many that it might seem that the significance of these 6 falling on these days is not particularly important. However, what these 6 share that the vast majority of others (which mostly occurred in middle eastern countries and africa) do not share is that they were given massive coverage by mainstream media and used as leverage to attempt to motivate a change of opinion regarding the military/political posture of western nations on key topics. Is it possible that a group or groups are creating these events in a co-ordinated way to attempt to manifest some kind of plan on Earth? This is the claim of many researchers and here I am going to go through and analyse the probability that such a theory is correct. Also note that 22 people died in Manchester (excluding the alleged attacker) and the alleged attacker was 22 years old. Do you remember how the US world trade centre attack occurred on 911, the number for ’emergency’ calls in america? The ancient art of numerology (working symbolically with numbers of significance) could well be being applied here.. let’s find out:

There are an average of 30 days in a month, which means that if there is no coherent pattern that is being applied consciously to ‘terror’ attacks globally, then there should be something of a random spread of days of the month that these events occur on. It is likely that it should take roughly 30 of these terror events before we find 2 that share the same day of the month. However, that is not what we find when we look at the dates of many of the bombings and mass shootings that have occurred in recent years. In fact, quite a few of them fall on the 22nd of the month and further, all 6 of the ones listed in the image above here fall on either the 3rd, 5th or 7th month. While there have been several hundred such bombings and shootings in recent years, i will only be focusing on the ones that occurred in ‘western’ countries and which involved significant media coverage, since it is these which are the highest candidates for having been deliberately created by western groups for propaganda purposes. It’s been a while since i did any kind of probability calculations, but let’s see what we can see (feel free to correct or improve on these calculations if you can):

So.. What could be the cause of the date patterns?

If the terror events were truly only the work of islamic extremists, then we should look to the isamic calendar for clues.. I am far from a scholar of islamic issues, so i turn to the basic wikipedia page on the topic:

The problem with this idea is that the islamic calendar has a totally different number of DAYS in it to the western ‘gregorian’ calendar – which means that it is probably almost impossible for such a repeating pattern that is meaningful in the gregorian system to also have meaning in the islamic system.

Can we find anyone else who is linked in to these number patterns in some way?

Well, since the other prime candidate for being the true planners of these terror events is often thought to be members of the shadow governments of the western nations and the western secret societies – such as Yale’s exclusive and small ‘Skull & Bones’ society (which both George Bush Jr. and Sr. AND John Kerry were all members of).. Well, maybe we should look at their calendar and the way that they deal with numbers… Makes sense to me.

www.youtube.com
a student is tasered for asking about the skulls and bones in a John Kerry lecture
Anyway, back to the numbers.. As it turns out, they appear to have a well defined numerical code, a system of numerology, that they apply to many aspects of their lives – even including the way they lay out photos of their group and the hints they drop through symbology and even architecture. In fact, the topic is so vast that it takes weeks just to even start to look into the full scale of the many examples of the number codes that appear to have been inserted into our world by this and related groups.

Marty Leeds is one of the best researchers i have found into these topics and he uses an approach that i also partially decoded long ago – but he has in some ways taken it further than I have and has found lots of interesting things with it. I’ll let him give you a quick overview of just a small amount of the ways in which the skull and bones group use numbers and symbology:
Skull & Bones – Pi & The English Alphabet / Marty Leeds
Skull & Bones – Pi & The English Alphabet / Marty Leeds

www.youtube.com
http://www.martyleeds33.com
We can see that this group definitely likes to encode numbers and symbols into their activities, but are they connected to 22, 3, 5 and 7 in some way? Well, we know their main number symbol is 322 – which is obviously 3 and 22 – so, yes, on the surface there is a symbolic connection.

To really do some useful analysis though, we need to go beyond hypothesis and just stick to known facts. Let’s see what we can learn from what is known about numerology.

The numerology of these attacks

The head of the man is constituted of 22 bones: 8 for the cranium and 14 for the face.
22 in numerology is considered a ‘master number’ and is defined on numerology.com as follows:

The 22 is the most powerful of all numbers, able to turn lofty dreams into realities. It is confident, pragmatic, ambitious and disciplined.
22 is double 11, which is also a master number

Remember: It doesn’t matter if YOU believe in the validity of numerology, it only matters that SOME people believe in it enough to use it when carrying out their evil deeds.
So, it sure looks like someone might be attempting to manifest something using these terror events in a way that is to them using some kind of numerical method of ‘magically’ or ‘metaphysically’ empowering their actions.

As it turns out, there are many more significant dates that also fall on the 22nd of the month (my thanks to the source for this image):

Are these also evidence of a numerologist connection? I leave it to you to decide!
Update: bomber was allegedly an MI5 ‘asset’

www.youtube.com
Counterterror raids continue across the UK after Monday’s terrorist attack in Manchester. More about the attacker’s identity has come to light: The son of Li…
Further viewing

www.youtube.com
TRANSCRIPT AND REFERENCES: http://www.corbettreport.com/articles/20100419_false_flags.htm Those who have studied history know that nothing invigorates and em…
A BBC documentary that exposed how NATO was caught organising false flag attacks against innocents:

All violence is a problem. Let’s not forget to follow the money and look at all involved.
by ura soul
Thu, 23 Mar 17 16:03:12
terrorism
thought
you can join the community to leave a comment
comments
innerverse
+1 resonating
innerverse 24. may 2017
My birth date is 3/22. This is a really thorough report. I will direct others to it.
ura soul
+1 resonating
ura soul 24. may 2017
heh – well you do have a skull and bones too.. DON’T YOU?! * raises one eyebrow accusingly *
😉
thanks for sharing
admin of this community, co-creator of reality & lover of life!
innerverse
innerverse 26. may 2017
I’m seeing many people wake up to the pattern with this latest sacrifice ritual in Manchester. Unfortunate that hearts are so closed that it requires this massive injustice to open them, but perhaps the field will soon be so densely packed with Truth seekers and sharers that the next ritual can be prevented before it begins.
ura soul
ura soul 26. may 2017
the polarisation will continue to spark those who are heartless to push for more heartlessness and those that are balancing to consider ways to stop the polarisation. i feel that the extremely reversed nature of many of those causing the violence means that even if god came to them in a form that they could accept as god and told them to change their ways, many of them would not survive the shock.
admin of this community, co-creator of reality & lover of life!
911zig
+1 resonating
911zig 30. may 2017
i always thought it strange that they should pick the date to end the first world war at 11-11…but when you do abit more research i found out that the ‘crown’ was established in the year 1111AD and who is always bowing down at the cenotaph every year revelling in all the war and death…then go and find out how much the queen has invested in arms manufactuers and oil companies…you dont have to…
[+] expand & read more [+]
911zig
911zig 30. may 2017
Here is a possibility why they use these numbers and dates http://theinfounderground.com/smf/index.php?topic=424.0%3bnowap
This thread is meant for investigation into the more occultic Aspect of The Talmudic Zionist Zohar Black Magic Kabbalah Rituals and Symbolism!

http://www.youtube.com
The London Bridge “terror attack” of June 3, 2017 including a van ramming and stabbig spree is a state sponsored hoax, coming intentionally 74-days from the …
admin of this community, co-creator of reality & lover of life!
find ureka on: follow us on facebook follow us on googleplus follow us on minds
earth heart community?termsprivacysitemapemail the administratortips for balance
being beacons of wisdom in an ocean of denial

lost passwordsign-up here to join us and receive updates