Posted on September 20, 2019 by fanofootball

A CRAZED driver who killed a dad and injured seven others after ploughing into a family’s car already had 25 points on his licence – but wasn’t banned.

Ivan Girga, 27, was careering down a 30mph road at an eye-watering 72mph when the horror smash happened, claiming the life of 42-year-old Ghusanfar Illyas. 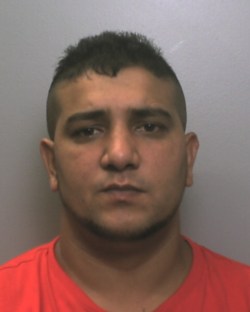 Gerard Hudson
People like this shouldn’t be banned from driving for ex amount of months/years, they should have their car seized, crushed, licence revoked, given a lifetime ban from driving and owning a vehicle. If caught by the police, breaking the ban, they should receive automatic jail sentence.

Vigilante
These are the mutants who rule the streets and the law in England. Nine years for all this carnage and out in in less than five. We must be the stupidest and softest judiciary on the planet, and the most liberal and asinine.

G Moses
What an absolute joke 25 points and still driving on the road. I wonder why he was not banned at 12 points. Must have been a soft liberal judge

Joe Essex
He looks the typical ‘‘smudged origin” type we have to live with – looks Khazarian/Ashkenazi to me but the name is of Egyptian origin.

GW: Good Grief – I went 34 in 30 zone & was instantly sent on a Speed Awareness Course!  R.I.P. – It’s a shame that this driver had to cause so much havoc before finally being removed from the roads.  We law abiding motorists must drive defensively at all times – as I always do.

This entry was posted in Uncategorized. Bookmark the permalink.