Has Cummings Got Some Short-Comings?

Erm …. Good Afternoon ….. ? Mr Dunn.  Come in.  Ah Mr Endersby – Tea?  Professor Hotopf, how wonderful you could make it.  Thank you for that kind note.  Have you met Martin Jones from Hertfordshire?  You have?  Oh.  Was that Earl Grey Elizabeth?  Won’t be a moment.  Oops!  So sorry Paul.  Beg Pardon. Yes that Annaliese Briggs business.  Hmmm … A touch of Management Training wouldn’t have gone amiss.  Here’s your Earl Grey at last Elizabeth.  Have you met Rosetta?

Well, who’s going to start off? 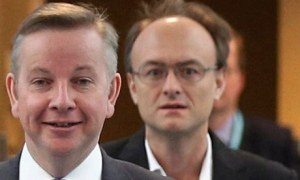 I will.  The first thing I have to ask is what on earth has Cummings got on his head?  Is that the hair of the chap behind or is it his own?

Seriously though Mr Dunn you were saying –

‘Nor is what we are told he believes about the genetic basis of performance accurate. Research shows that about 70% of a child’s attainment in tests (if that equals performance) is determined by their attainment last time they were tested, going back to starting school. Other factors influencing performance are gender, ethnicity, socioeconomic circumstances etc. This does not show that the 70% is genetically determined, as Mr Cummings ought to know. A great deal of the brain is wired in the earliest years of life in response to experiences. Therefore it ought to be possible to improve “performance” of children by supplementing the richness of their early experiences.’

Dr Endersby – ‘The bigger problem with Cummings’ argument is that it implies a view of education in which children are a commodity whose market value we should seek to maximise. Children are people, whose value is intrinsic; those of us who are merely “mediocre” in his view are still citizens with human rights, including the right to an education.’

You were in Canada Elizabeth?  ‘I spent part of the 1990s in Canada, where education was a sought-after profession that attracted and retained excellent teachers, in part because teaching was both reasonably well paid and realistically doable. Instead of expecting primary teachers to cover not only literacy and numeracy as well as science and the humanities but also music, drama and PE, there were specialists who took on these roles, including small-group activities for “gifted” children as well as for those who needed help in maths and reading. School counsellors were standard, and there was also a large and well-used library in every elementary school.’ 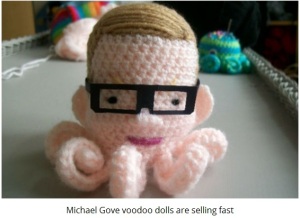 UPDATE:  Michael Gove VooDoo Doll selling ‘like hot cakes’.  http://www.theargus.co.uk/news/10726980.Brighton_knitter_s_Michael_Gove_voodoo_doll_sells_like_hot_cakes/  Great news for the economy.  Better tell Mike Robinson at UK Column.  He was rather ‘down’ about the lack of change in youth unemployment today.  UK Column 16 October 2013.