UK Column Analysizes the State of the Nation

Posted on October 9, 2013 by fanofootball 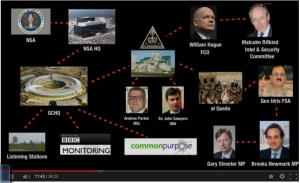 Mirror warns of Gov intention to ‘gag’ the press.  http://www.mirror.co.uk/news/uk-news/labour-mp-tom-harris-british-2352749

Terrorists and Criminals being allowed into UK by Teresa May and Brooks Newmark telling us he has links with General Idris who has terror links.  Andrew Parker of MI5 is saying that he’s worried about the amount of information in the public domain.  Spys don’t seem to be doing their job despite closely monitoring emails and computer use of the General Public.  They are worried about how that Syria vote went.  GovWatch:  If there is a ‘terrorist’ incident on UK soil we will know who to blame and it’s not the Muslims.  Blame Andrew Parker.  False Flag warning. 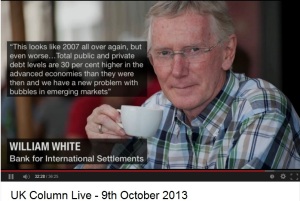 Good piece highlighting all the ‘false news’ about recovery followed by the slide to the left.

UK Column tells us what is actually going on. 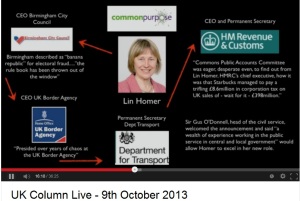 Comment:   ‘It’s time to start taking action, publicise ALL common purpose members details, make their local communities aware of them and what they’re doing. Refuse to serve them in shops etc. Make their lives unbearable for them.  We don’t need to be violent about it, just start making everybody aware of who they are, force them into the open and give them the publicity they hide from. Post pictures of them everywhere, film them wherever they go, ridicule them, there are many ways to deal with them.’

Comment:  ‘Paedofiles, perverts, psychopaths, all being blackmailed, called government. I can’t thank Teresa May enough.  Three years ago I was mentally ill, ptsd etc. I heard her say on TV that mental illness will increase 10 fold.  That tuned me into asking how does she know, then it clicked.  I couldn’t get a test that’s reliable in the UK to check for heavy metal content.  I got it done in Germany.  Showed 13 toxic metals.  Within 3 months 35 mc/g of mercury was removed, mental illness went away.’