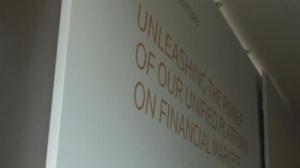 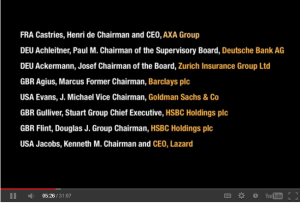 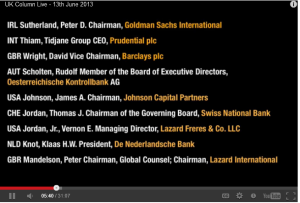 Bloomberg has said that the Exchange Rate Trading is rigged.  Banks are trading against their clients.

Post Bilderberg the Cleaning Company said ‘There was a lot of dirt to shift’.  Taking up carpets?  Oh Dear very Spooky.

G20 in September will stop Bail-outs and legislate for Bail-ins.  Trouble ahead.

We want Glass Steagall and the Bradbury Pound.  we must force the debate into the House of Commons NOW!

Criminal International Banksters must be removed.  Iceland did it and so can we.

Greece still suffering under the Troika and their public broadcaster has now been shut down.  Wake up BBC.  Wake up! 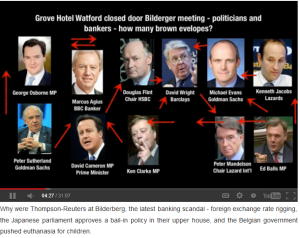 All the links in the Bilderberg 2013 chain.

Belgian Parliament has decided that children have a human right to commit suicide. They are not allowed to vote though. Doctors will now decide whether they live or die. This is very dark.

And just what did Richard Harrington have to say about Bilderberg?  Well at first absolutely nothing.  Later he referred questions about Bilderbert to Dorothy Thornhill.  Funny I thought Mr Harrington thought Dorothy was an over paid local politician which Watford could do without.  Quoi?  Well what can one expect?  One never gets much of an answer from Mr Harrington.  He usually does a bit of ‘cut & paste’ from ConBlurb.com if he bothers to answer at all.