Mr Balls Socks it to The Chancellor George Osborne

‘Our Leader’ pointed out to me yesterday that Mr Balls had a very good day in Parliament on 17 May 2012.  He apparently shot quite successfully at the chancellor who seemed, looking at the body language, rather reduced in stature.  He also took Richard Harrington our local Con MP down as well.  However, this was an easy task as our MP is just a delivery system for Tory rhetoric rather than a genuine debater.  Exchange reproduced below. 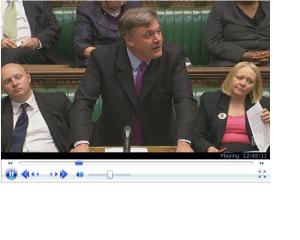 Richard Harrington (Watford) (Con): I am listening with some perplexity to how the shadow Chancellor referred to the Budget as one for rich people, because I have calculated that in my Watford constituency, nearly 4,000 people have been taken completely out of tax by the increase in the personal allowance. I am sure that the right hon.

Richard Harrington, riveted by the demanding role he plays?

Gentleman will join me in congratulating the Chancellor on such an excellent measure.

Ed Balls: The hon. Gentleman might need to go back to the drawing board because the Institute for Fiscal Studies has shown that last month’s measures will, as a result of cuts to tax credits, mean tax rises for the average family with children in his constituency—and that is even before taking the rise in VAT into account and it does take the personal allowance rises into account. The fact is that taxes have gone up for low-income families, they are going up for the middle classes, and it is only the highest earners in the hon. Gentleman’s constituency that are getting the tax cuts.

See the Action for Yourself